Age of Consent in the UK: A guest post by Dr. Kieran McCartan

The issue of what the age of consent to sexual activity should be was recently raised in the UK. On this occasion it was not in the context of an offence, nor was it in the context of punishment. Rather, it was raised in the context of prevention, as well as public health. It was suggested that the age of consent in the UK (which is 16) should be reviewed, reportedly in an attempt to prevent teenage pregnancy, poor and problematic teenage sexual relationships, and to allow for appropriate and realistic engagement between practitioners and children.

Ideas around consent, puberty, sexual engagement, child protection, and public health are at the heart of work with persons who have sexually offended. Indeed, we only have to look at James Cantor’s talk at the November 2013 annual conference of the Association for the Treatment of Sexual Abusers. So, when Professor John Ashton called for a national debate on lowering the age of consent from 16, it was clear that we really need to consider the implications of this proposal. Professor Ashton suggested that lowering the age of consent would help better educate children about engagement in sexual behaviour and, therefore, protect them more fully. He cited as examples of best practice other European countries with a lower consent age, indicating that these countries generally have lower teenage pregnancy rates, lower infant mortality, and lower levels of sexual transmitted diseases. Professor Ashton’s suggestion was dismissed out of hand by UK Prime Minister David Cameron as damaging, irresponsible, and insulting.

Age of Consent varies internationally, and sometimes nationally, as demonstrated in the following table: 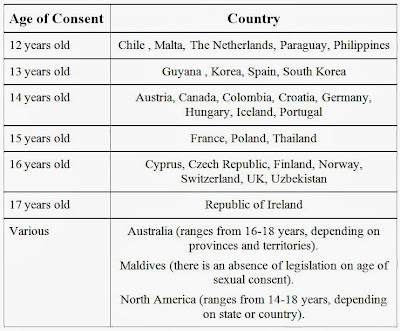 Regardless of your opinion as to what the age of consent should be, there are real issues relating to sexual abuse and child protection caught up in this debate, including:
So, should the age of consent be lowered? I’m not sure anyone has a good or conclusive answer to that question, and I am no different. Should changes to age of consent and their implications be debated?  On this, I would say “yes”. Consent and understanding of sexual behaviour should be framed as an issue important in child protection, over and above how they pertain to  childhood development and sexual exploration. Maybe the place to start is in considering the social harms versus social benefits that may result from different standards of age of consent. Further, it will be important to assess the impact of age of consent on child vulnerability and the sometimes inevitable negative social consequences that come with breaking the “social contract” of the age of consent, which appears to be different from the actual “social norm” of childhood sexuality. This suggests that Professor Ashton is correct, in that childhood sexual behaviour is a public health issue that needs to be framed in a preventive/educational dialogue that helps protect children. Community engagement is at the forefront of this perspective.

Dr. Kieran McCartan
Associate Professor in Criminology
Programme Manager in Criminology
University of the West of England, Bristol UK
kieran.mccartan@uwe.ac.uk
Posted by SAJRT Blog at 7:59 AM