CoSA in the USA ... and Beyond

In some respects, this has been a big year for Circles of Support & Accountability. Internationally, the first UK projects celebrated their 10th anniversary of offering Circles, in addition to completing a matched comparison design evaluation that mimics existing research in its findings (approximately 70% reductions in violent or sexual offending--these results are currently in peer-review). Under the direction of Executive Director Stephen Hanvey, Circles-UK also commissioned a cost-benefit analysis from researchers Ian Elliott and Tony Beech and published in SAJRT. When reviewing only tangible costs, CoSA costs no more than traditional probation supervision. However, when intangible costs are also factored in, the CBA reaches 3.52; meaning that for every British Pound spent on CoSA, taxpayers get £3.52 back in benefit.


Elsewhere, the European group, headed up by the Netherlands, has secured a grant from the European Union to sponsor CoSA development in Bulgaria, Catalonia, and Latvia. The Dutch group—led by Bas Vogelvang, Mechtild Hoing, and Jeanne Caspars—jumped right in and started adding their voice to the CoSA movement worldwide. Specifically, they contributed to a small but important revision to the graphic for CoSA—seen below—in adding specific reference to a coordinator role essential to ensuring ongoing dialog between the two levels of support and accountability. Their most noteable contribution has been the publication of a European CoSA Handbook. 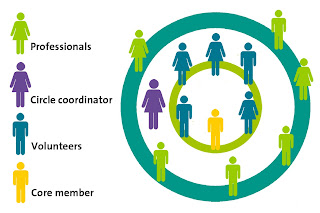 Here in the United States, we have also seen some great strides forward in the CoSA movement. Colorado and Vermont have been ongoing recipients of Second Chance Act grants intended to assist (at least partly) with sexual offender reentry. Elsewhere, Circles projects continue to sprout up in various US locations. Towards the end of this year, the federal government (through the SMART Office) issued three CoSA-specific requests for proposals:

1.     To support three CoSA start-up projects (Oregon Department of Corrections and the Criminal Justice Resource Center in Durham, North Carolina were ultimately named by DOJ)
2.     To provide training and technical assistance to the OR and NC projects, as well as other CoSA projects on an ad hoc basis (with that DOJ contract going to a group led by yours truly and including Canadian CoSA expert Andrew McWhinnie)
3.     To conduct an evaluability study on CoSA projects in the USA (awarded by NIJ to the aforementioned Ian Elliott and his associate Gary Zajac at Penn State)

The move by SMART to fund CoSA-related projects is part of their ongoing attempts to encourage and support evidence-based practices in sexual offender risk management. CoSA projects are now underway or in progress in California, Colorado, Minnesota, Nebraska, North Carolina, Oregon, Pennsylvania, Washington, and Vermont. A first-ever all-USA CoSA symposium was held at last fall’s annual ATSA conference in Denver, with CA, CO, MN, and VT represented. Of particular interest during the symposium was the presentation by MnCoSA, which reported results from a recently published RCT evaluation of their project. Although the follow-up period was too short to show significant differences in sexual recidivism, significant reductions were noted for CoSA core members in regard to probation violations, incurring new charges, and return to custody. Last, MnCOSA researcher Grant Duwe was able to show a 1.82 cost benefit (also in SAJRT).

Finally, Canadian CoSA projects are embarking on a national evaluation, with funding provided by the National Crime Prevention Centre (an arm of Public Safety Canada). We hope to start seeing more extensive outcome data from Canada in about 18 months.