I was quite pleased to see Todd Hogue's Goal Attainment Scaling (GAS, 1994) concept get some recent focus in the research literature.

I'm a long-time fan of the GAS protocol. In the early 2000s, two of my former grad students used GAS scores as a measure of both treatment change and client responsivity. Actually, for a while, those two studies (Stirpe, Wilson, & Long, 2001; Barrett, Wilson, & Long, 2003 -- published in SA:JRT) were the main (maybe even only) references for using GAS in measuring sexual offender treatment progress--institution to community.

As such, the Beggs and Grace paper is welcome addition. As we noted in our studies, Beggs and Grace found that the GAS was a useful framework for measuring treatment change for sexual offenders against children who completed a prison-based treatment program (the oft-cited Kia Marama program in New Zealand). Additionally, they found that post-treatment GAS scores predicted reductions in recidivism (ROC = .66).

Total SGAS was negatively correlated with recidivism (r = -.21), indicating that those offenders who were judged as having attained the goals of treatment to a greater extent were less likely to reoffend. Scores on several of the SGAS goals—empathy, relapse prevention, and motivation to change behavior—were also significantly related to reduced recidivism.

The measures of treatment gain involving ratings based on behavioral descriptors—VRS:SO change and SGAS scores—may be more readily applicable to clinical settings than risk frameworks based on psychometric batteries.

At the Civil Commitment Center in Florida (FCCC), we instituted a GAS protocol almost two years ago, as a way to assist us in measuring in-treatment change for sexually violent predators involved in our Comprehensive Treatment Program (CTP) for persons who have sexually offended.

Actually, we modified the structure somewhat. We started out with the same items noted in the Barrett et al. (2003) paper, but added two additional sections which are essentially the items of the Stable-2007 and Acute-2007. This has allowed us to use the helpful Hogue framework (traditional GAS) while also monitoring status on stable and acute dynamic risk variables.

At present, the expanded GAS framework is completed by the client's primary clinician at six month intervals. As a way to further increase client responsivity, we also designed a self-report version of our FCCC GAS protocol, so that the client's could also rate their own progress. This has proven very helpful as clients and their clinicians meet to discuss their respective beliefs regarding the client's participation in the CTP. Indeed, on many occasions, clients' ratings of their status in treatment have been illuminating to clinicians in terms of where their respective clients have been experiencing difficulty.

Overall, it has long been my belief that GAS protocols are very helpful, but woefully under-utilized framework for rating and monitoring clinical gains for sexual offender clients in treatment. Anyone wishing a copy of the GAS protocol we use here in Florida, is welcome to email me at dr.wilsonrj@verizon.net.

Additionally, for those interested in such things, I will be speaking about the GAS framework at the Michigan ATSA conference on April 15 in Grand Rapids and the Risk and Recovery conference in Hamilton, ON on April 29th, while my colleague Donald Pake will be doing so at the Florida ATSA conference on May 21 in Orlando.

The esteemed Dr. Hogue will be a presenter at this year's ATSA conference in Toronto. He will be discussing "Therapeutic Responses to Individuals with Cluster B Diagnoses."

RJW
Posted by SAJRT Blog at 1:00 PM No comments:

Just back from two weeks in Australia, providing training (with my associate David Prescott) in assessment, treatment, and risk management of persons who sexually offend to various agency, clinical, and law enforcement staff in Bundaberg (see earlier post) and, more recently, Corrective Services staff in Perth. 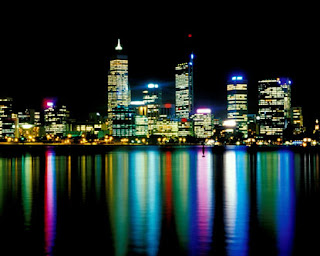 As you can see from the photo above, Perth is a lovely city with an amazing skyline. It is also apparently the "most remote city" on the planet.

While in Perth, David and I were hosted by the Training Academy of the Corrective Services of Western Australia. We had a very engaging week with a variety of Corrective Services staff, including psychologists, parole officers, policy staff, and assorted managers and other supervisory personnel. 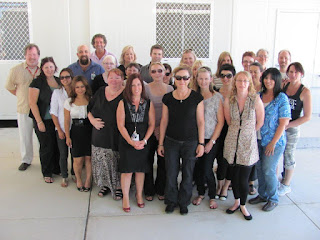 Our Corrective Services class, as a group (above) and in action (below). 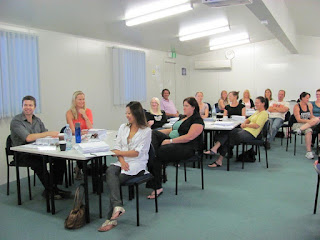 Of interest, Australia continues to struggle with many of the same issues that we do here in North America. Specifically, Australia is exploring how they might institute policy regarding community notification (they do not presently do so), in addition to trying to establish good practice with respect to persons who are particularly sexually dangerous. Regarding the latter, Australia has existing legislation that is something of a blend of Canada's Dangerous Offender designation and US-style civil commitment without the civil commitment centers.

Circles of Support & Accountability continues to be a topic of interest down under, but those seeking to institute projects are struggling to find a toe-hold. Interested blog-readers from Australia should contact me so that I might link people with similar interests.

This blog post ends my month long travelogue that included posts from Latvia and Australia.

Posted by SAJRT Blog at 1:45 PM No comments: