Winter and Conference Planning in Toronto...

This past weekend, the Association for the Treatment of Sexual Abusers’ conference planning committee met in Toronto. This was a mini homecoming for me. Prior to moving to Florida nearly four years ago, I had never worked anywhere as an adult but Toronto. This is my town, and I’m exceptionally proud that this year’s ATSA conference (November 2-5) will be held in Toronto. As you can see in the photo, taken from my room in the conference hotel, it’s a bit cold right now (think Great White North), but in November it’ll be the epitome of crisp fall days in Canada. 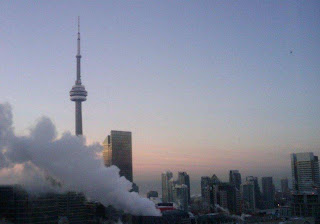 As a nearly lifetime Torontonian, let me tell you a few things about TO. First of all, it’s pronounced “Trawna”. This is the home of the Hockey Hall of Fame (walking distance from the hotel), but the much maligned Maple Leafs haven’t won the Stanley Cup in nearly 50 years. In fact, not since Tim Horton played on the team. On that note, I entreat you all to sample the iconic Canadian coffee that bears his name. It has often been said that Toronto is the cleanest big city in North America, for good reason. It has also often been said that Toronto is most multicultural city on the planet, with more languages being spoken here than anywhere else in the known universe. You’ll love the range of culinary and cultural experiences.

Conference co-chairs Franca Cortoni (from ) and Anton Schweighofer (from ) and the rest of the Committee have a big task ahead of them. You see, this is ATSA’s 30th Anniversary, and the Association wants to do it big and proud. As a fitting theme, the Association has chosen “Milestones: Past, Present, Future”. For a couple of days, we bandied about many different topics. I had the distinct pleasure of sitting beside Bill Marshall and Howard Barbaree who, in many ways, defined much of Canada’s approach to working with persons who sexually abuse. Right beside them were Yolanda Fernandez and Leslie Helmus, two of the next generation Canadians (and former student members of the ATSA Board of Directors) who are building on the Marshall and Barbaree foundation.

According to Wikipedia, a milestone is “one of a series of markers placed along a road”. In the photo is the world famous CN Tower, until recently the tallest free standing structure in the world. You can see it for miles and miles, or kilometers and kilometers—a true marker along the road. In our parlance, milestones have been the watershed moments in the history of our discipline—evidence-based practice in the assessment, treatment, and risk management of persons who sexually abuse. And, we’ve had some big ones:

All of these “milestones” have had a dramatic impact on how we do business in increasing public safety and preventing sexual abuse.

But, that’s not the end of it. This year’s conference will strive to show where we’ve been, where we are now, and where we’re headed. It’s been pretty clear to me that, as a committee, this year’s group of planners are doing their very best to entice potential conference attendees with a roster of plenary, preconference, and concurrent session speakers that will help define the very best of the work we do. It will be one of those opportunities that nobody who’s anybody will want to miss. But, remember that you'll need a passport if you're coming up from the United States.

I’ve been an ATSA member since 1996, and have not been absent nor missed an opportunity to present at this conference since that time. The annual ATSA conference is always my “big event” of the year. Where else can you brush shoulders with the true giants of your field while they demonstrate all the best qualities of collaboration, collegiality, and courage?

The deadline for submitting abstracts is March 6, and registration will be available sometime in the not too distant future – stayed tuned to http://www.atsa.com/ and this blog.

Posted by SAJRT Blog at 8:01 PM No comments: